He almost become celebrity who being praised on the campaign trail for showing affection and positivity to his wife. Few days back, many Kamala Harris supports expected that Doug Emhoff would move into the White House next year if his wife is elected president which is not possible now.

I’ve got you. As always. 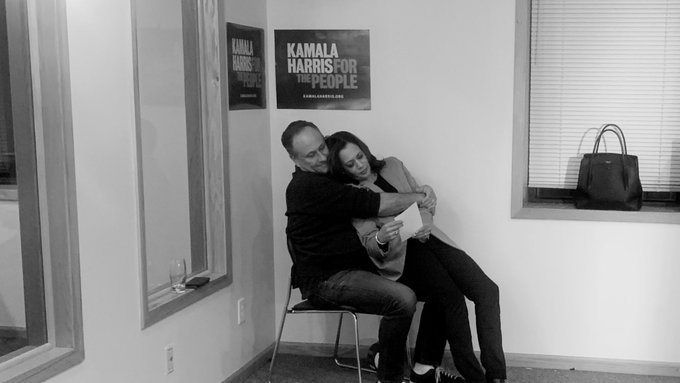 13.1K people are talking about this

Just after her announcement, Douglas Emhoff immediately tweeted : “I’ve got you. As always,” . Whats a beautiful black and white photo of the both! Too cute. What a lovely couple ! Simply amazing.

Emhoff was marriage to Kerstin Emhoff before he met Kamala.  He has been married to Kamala Harris from August 22, 2014 after the blind date arranged by their friend. The wedding function occurred at the Santa Barbara County Courthouse in Santa Barbara, California.

He was born on October 13, 1964, in New York, USA. He is currently 54 years old. The lawyer has not disclosed information regarding his parents and siblings.

Do you know that Douglas Emhoff is a highly experienced litigator and strategic advisor ?

Though he was born in Brooklyn, New York, California has arguably had the biggest impact on Emhoff’s life. After finishing graduation from the University of Southern California’s Gould School of Law, he took a job downtown in Pillsbury Winthrop’s litigation group.  In 2000, he opened his own Beverly Hills firm with fellow USC alum Ben Whitwell.

It grew to 12 attorneys before it was acquired in 2006 by Venable, Before joining DLA in October 2017, Doug opened and managed the California offices of another major AmLaw 100 firm, building its California presence to over 120 lawyers.  He now works as a partner at DLA Piper Law Firm.

He also achieved a Juris Doctorate degree from the University of Southern California, Gould School of Law.

He has two children: Ella and Cole from his first marriage with Kerstin Emhoff.  His son, Cole, is a graduate of Colorado College and his daughter Ella is a studying Fine Arts at Parsons School of Design. These kids quite focus on their studies and call their stepmother “S-Mamala”. Previously Emhoff took some time off the campaign trail to spend spring break with Ella.